Caserta and its province

The half day tour of Caserta includes just one of the four sites described below, and it will last about 2 hours by meeting you at the spot

The Royal Palace of Caserta belonged to the House of Bourbon from 1752 to 1860 when it passed to the Savoy family. The Palace became the property of the Italian state in 1919.
When Luigi Vanvitelli died in 1773, the work was still unfinished. It was only when in 1847 the Throne Room was finished, that the work could be considered completed. The Palace has a square design and the area is split into four courtyards separated by an impressive entrance hall and three naves with two lateral wings. Vanvitelli designed a truly majestic entrance to the Palace with an immense avenue leading up to it flanked by two huge semi-circles that make up the Piazza Vanvitelli. The Royal Palace has 1,200 rooms and includes the Piazza at its feet, the Park and the English Garden.

The Park extends over approximately 120 hectares on slightly sloping land and is one of the greatest architectural complexes in Europe. Water for the park and its fountains is supplied by the Vanvitelli Aqueduct.
The six monumental fountains that adorn the gardens were designed by different architects.
A wing of the park is occupied by the English Garden

Casertavecchia is an Italian medieval village that lies at the foot of the Tifatini Mountains located 10 km north-east of the City of Caserta. The previous Roman town was called “Casam Irtam” (from the Latin meaning “home village located above”).
The village was initially conquered and ruled by the Lombards. Under Norman domination, the village began the construction of its cathedral, dedicated to St. Michael the Archangel. Under the rule of the Bourbons, major construction began taking place in the city of Caserta. By 1842 political rule had entirely moved to the great palace in the larger city.
In 1960, Casertavecchia was designated an Italian National Monument. Sites worth visiting consist of the Cathedral of S.Michele, a magnificent example of arab-norman architecture with a polychromatic lantern and belltower, the remains of the original castle and the Mullioned House, an example of a 15th century aristocratic home.

Cicero called ancient Capua Altera Roma, and now it corresponds to the modern town of S.Maria Capua Vetere. Its monuments remind us the splendour of the Roman time: The Mitreo and the Amphiteatre.

The Mithraeum was a place of worship for the followers of the mystery religion of Mithraism. It could be either an adapted natural cave or cavern or an artificial building imitating a cavern. The site of a mithraeum may also be identified by its separate entrance or vestibule, its “cave”, called the spelaeum or spelunca, with raised benches along the side walls for the ritual meal, and its sanctuary at the far end, before which the pedestal-like altar was located.
The one of S.Maria Capua Vetere dates back to the 2nd-3rd centuries AD. On the far wall a fresco of the god killing a bull can still be seen (2nd century AD).

It was built in the time of Augustus, restored by Hadrian and dedicated by Antoninus Pius, as the inscription over the main entrance recorded. The exterior was formed by 80 Doric arcades of four stories each, but only two arches now remain. The keystones were adorned with heads of divinities.
The interior is better preserved; beneath the arena are subterranean passages like those in the amphitheatre at Puteoli. It is one of the largest in existence; the longer diameter is 170 m (185 yd), the shorter 140 m (152 yd), and the arena measures 75 by 45 m (83 by 49 yd), the corresponding dimensions in the Colosseum at Rome being 188, 155, 85, 53 m (205, 170, 93 and 58 yd).
Close to the Amphiteatre you can find the Gladiator Museum, full of original armour; it will be particularly appreciated by children.

San Leucio is a small village in the province of Caserta. It is most notable for a resort developed around an old silk factory, included in the UNESCO World Heritage sites list in 1997.
In 1750 Charles VII of Naples selected this place for an unusual social and tecnological experiment, a different model of production based on technical innovation and alert to the needs of workers: a silk factory. The complex was transformed into a silk production site and industrial buildings were added, which was quite unique in late 18th-century Europe. Noisy looms were installed next to royal apartments and a sitting room became a chapel for the workers.
A new village was built for workers’ residences, and a large community of silk weavers grew into this industrial town, which in 1789 was deemed the “Real Colonia dei Setaioli” (the Silk Weavers Royal Colony). The revolution of 1799 stopped the complete realization of the Ferdinandopoli, but the heritage of King Ferdinand still survives today in the local silk and textile firms, which work on an international scale to elite foreign clients as the Buckingham Palace, the White House, the Quirinale Palace, the Palazzo Chigi.
The S. Leucio Belvedere, which used to be a smaller Royal Palace for the King and its family, was re-open to the public few years ago, and it shows us some original old looms and machinery restored and displayed inside the Belvedere courtyard. 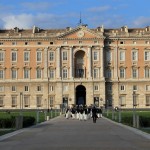 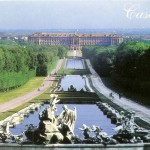